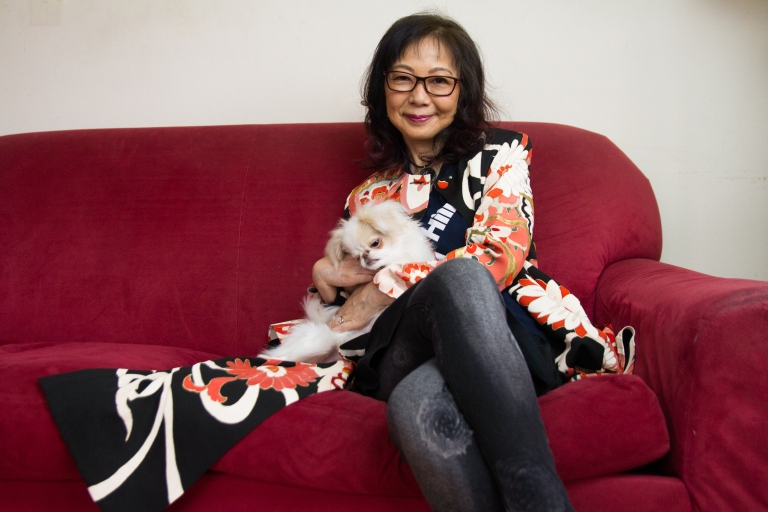 Click below to listen to an excerpt of Chiori’s play I Came to Look for You on Tuesday
read by Maria-Christina Oliveras and LeeAnne Hutchison. Sound Design by Martha Goode.

After November 8, 2016, my soul became homeless. Every day since then, I’ve been looking for a road back to being American. In 1993 under the Clinton presidency, I became a US citizen, giving up all rights to my birth country, Japan. I didn’t have any sentimental feelings about the decision at the time, but on the morning of November 9, I thought about the original citizenship I lightheartedly let go many years ago, when I woke up without a definition of myself.

The road to American was always rocky for me. At fifteen, I had to rebuild myself, learn an entirely new culture (still an unfathomable one) and a brand-new language. I hadn’t managed to become quite all-American before November 8. Instead, I’d made a bizarre culture of my own, an amalgamation of imaginary Japanese sentiments and acquired American beliefs. Perhaps because of this personal history, my plays—whether they take place in Chekhov’s Russia or on death row in a prison in Texas—are in the end, about memory and identity. Possibly because my time line did not flow in one direction (starting over as an immigrant) I view the stage as a place where the time is unpredictable and malleable, and we live with all kinds of “ghosts”.

I’ve had a fortunate journey in theater. My plays have been produced by off-Broadway theaters (Vineyard Theater, New York Theatre Workshop, Women’s Project), at renounced performance spaces in NYC (Performance Space 122, HERE, Ohio Theater, Culture Project) and regionally (in recent years, This Lingering Life premiered in San Francisco at Z Space and Antigone Project had a revival at Stage Rep in Baltimore). Twelve of my plays are collected in two books: Thousand Years Waiting and Other Plays from Seagull Books and America Dreaming and Other Plays from NoPassport Press. I’m grateful for many fellowships I’ve received that supported my work, including a New York Foundation for the Arts Playwriting Fellowship, a McKnight Playwriting Fellowship, a Van Lier Playwriting Fellowship, a Rockefeller Bellagio Residency in Italy, a Radcliffe Institute Fellowship at Harvard University, and a New Dramatists Residency (2006-2013.)

In addition to writing plays with magic realism and collaborating with amazing theater artists, I’ve been lucky to experience some magical events in my life. I was granted a private audience with The Dalai Lama and visited him in Dharamshala, India. For seven years leading up to the seventieth anniversary of atomic bombings, I collaborated with several Hibakusha—survivors from Japan–on annual theater retreat with NYC public high school students. I worked with survivors of domestic violence to create solo shows based on the women’s childhood memories.

I created a fellowship program for emerging writers of color at New York Theatre Workshop, designed and managed Asian American Playwrights Fellowship at The Public Theater, produced two performance festivals which included many interesting artists of color and women at the former Dance Theater Workshop, and designed a rigorous undergraduate playwriting program from scratch at Bard College under director JoAnne Akalaitis, where I continue to teach after her retirement. I’ve travelled extensively in East and South East Asia with a support of National Performance Network and Asian Cultural Council.

At the end of 2016, I spent three days in Moscow and visited Chekhov’s house, Dostoyevsky’s childhood home and saw Swan Lake at the Bolshoi Theater. Growing up in a small snowy town called Nagano, I saw a Bolshoi Ballet Company production on tour every year. As a child, I never dreamed that one day I’d visit Moscow to see it at their home theater.

Everything I’ve done as an adult so far was made possible, I still believe, by living my life as a playwright in New York City. But on a fundamental level, I felt that my identity was threatened at the end of 2016.

I haven’t felt the disparity between who I think I am and who the nation identifies me so severely since I was a teenager.

As I was conceptualizing Jody’s project with her, my mind was not clear about my future-self. I asked her if I could reflect on my identity and my home. I’m married to a wonderful human being and visual artist, Hap Tivey. We have a little puppy Dandy Lion. Every day, I think—tomorrow is another day.